Putting Your Paper on a Diet: Slimming Down an Academic Text 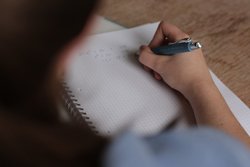 The opinions expressed in this article are the author's own and do not necessarily reflect the view of Academic Language Experts.

The move from a structuralist account in which capital is understood to structure social relations in relatively homologous ways to a view of hegemony in which power relations are subject to repetition, convergence, and rearticulation brought the question of temporality into the thinking of structure, and marked a shift from a form of Althusserian theory that takes structural totalities as theoretical objects to one in which the insights into the contingent possibility of structure inaugurate a renewed conception of hegemony as bound up with the contingent sites and strategies of the rearticulation of power.

Most readers, even professional researchers, find this kind of academese virtually undecipherable. However, some authors nevertheless write in just this style, brandishing five-syllable words, lengthy sentences, and ambiguous phrasing.

It is true that academic authors need to keep in mind their intended audience, its knowledge level, and to use (correctly) the technical terminology of the discipline, this does not preclude writing in plain English. Plain language does not mean boring language. Clear, fluent, and straightforward English prose can create vivid images, memorable phrases, and impactful arguments far better than a stereotypically convoluted academic style.

A study by psychology professor Daniel Oppenheimer showed that readers view this kind of complex text negatively. This negative reaction is only reinforced by readers’ busy lives, the 24-hour-news cycle, and information overload, which compels readers to scan texts in order to absorb information more quickly.

When readers encounter academic language that is difficult to understand, they will often move on. If authors hope to excite readers about their subject and reach a broader audience than highly specialized academics, the language should be easy to read.

Dense text can also make working with an academic editor more difficult, as the editor will question areas of confusion and seek clarity—taking more time to finish the paper.

Authors and editors should be aware of the following signs of poor academic writing and be able to correct them:

To create engaging academic articles and books, authors and editors can work together to craft a text that shows readers how much the author understands a subject, rather than how much he or she knows. Academic editors are the field marshals who can help authors reach that goal.