The Pleasure and Pain of Self-Translation 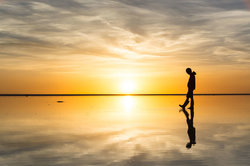 In a recent interview for Asymptote Book Club, Pulitzer-winning author Jhumpa Lahiri talks about her project to self-translate her latest Italian novel into English, within the context of her creative journey. She says that she does not know what it will be like to translate her own novel, but feels that “it’s important to try.” Why might an author want to self-translate?

Presumably, there is the pleasure inherent to the act of translation itself, and the pleasure (or pain) in revisiting certain characters, scenes, and dialogue, with the opportunity to imbue them with new life. Self-translation might also be good practice for improving an individual’s skills as a writer; after all, thinking in different languages requires flexing different muscles, so to speak.

Such activity is perhaps the ultimate example of taking ownership of one’s work as a writer, highlighting the visibility of authorship and translatorship simultaneously. Vladimir Nabokov, for example, disapproved of the first English translation of his Russian novel Camera Obscura (1932) by Winifred Roy (1936), only to provide his own version in English; and Samuel Beckett famously translated all but one of his own works between French and English (in both directions), drawing inspiration from the revision process.

And then there are ideological and political reasons for self-translating. Consider the case of Ngũgĩ wa Thiong'o, the exiled writer who was imprisoned in Kenya and afterwards forced to flee to the United States. In 2006, he translated a novel he had written in his native Kikuyu (Murogiwa Kagogo) into English (Wizard of the Crow) with the stipulation that readers should be made aware, at the start of the book, that it had been translated by the author. This highlighted the fact that the book’s original language is African and was part of his quest to promote literature in African languages.

Self-translation: Is it translation at all or is it revision and adaptation?

The notable 20th-century American translator Willard Trask (1900-1980) said that the translator’s talent is similar to that of the actor’s in that “both take something of somebody else’s and put it over as if it were their own.” But in self-translation, there is something else at play.

Another important question to ask is: Which factors influence the lexical and syntactic choices of the self-translator, who is working in languages that are attached to distinct cultures and histories, with different linguistic constraints, and whose affinity with each language is constantly evolving?

Such questions are now being taken seriously by the international academic community. Indeed, the phenomenon of self-translation has, in recent years, increasingly attracted interest from scholars as a discipline in its own right and a subject of research, with the first international conference on self-translation taking place in Italy (Udine) in 2010.

Understanding what self-translation is, requires the intervention of several disciplines, including translation studies, psychology, sociology and philosophy, as well as questions about multilingualism. Of course, the analysis of self-translations by esteemed writers alongside their original works is indispensable, to see what differences emerge and what effect this has for the reader/spectator of a book or play.

My experiment in self-translation

In order to gain a better understanding of self-translation for myself, and what is at stake in the process, I decided to carry out a comparative study. I took a short story I had written in English (my native language) and translated it myself into French (the language I translate into). At the same time, I asked an anglophone colleague to do the same and produce his own French version of the same narrative.

It turns out that the most interesting difference to emerge between the two French versions concerned the story’s title, ‘Holiday.’ I self-translated this into French as ‘Vacances’ and my colleague opted for ‘Jour de congé’ (literally ‘day off’). I felt that my colleague’s translation did not represent the underlying network of ideas in the story, centered on a couple trying to overcome the woman’s infidelity: she believes that taking a holiday together will be healing, whereas her partner craves a different sort of 'holiday' altogether, namely a break from their relationship (which may or may not be temporary). These thoughts led me to revise the original English title from ‘Holiday’ to ‘A Break,’ which in English conveys two meanings: taking time out to relax (helping to ‘mend’ a relationship) and rupture (separation).

What my experiment showed me was that self-translation is like a challenging workout or exercise in self-reflection. The writer-translator is forced to think about his/her original choices from the perspective of an outsider while remaining very much an insider as the creator of those original ideas.

Impossible, inevitable, and ripe with potential

In an interview with The New York Times in 2011, Swedish playwright Jonas Hassen Khemeri said, “It’s almost impossible to translate your own words. You need someone who’s a bit rough with the text, who can challenge it and take it for a ride.” A pitfall of self-translation, then, could be treating the original text too tentatively.

Whether or not self-translation is “almost impossible,” the fact remains that many writers do self-translate (and have done so for centuries). Furthermore, writers who master more than one language may exercise the freedom to compose an original work in their second or third language before translating it into their mother tongue, rather than the other way around.

Ultimately, self-translation is about exploring authorial, linguistic, and textual identities. It is all at once a generous and a selfish act, a creative journey in which the richness, potential, and limits of language are tested.