Translucation- Professional Translation is Education, Too

German and Japanese Translation as a Test Case 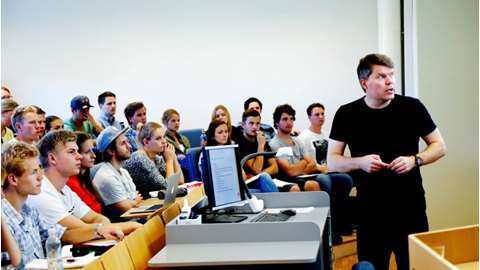 The job of a professional academic translator is to understand and generate understanding. Occasionally, however, certain components of the source language are difficult to render in the target language because they presuppose cultural knowledge. This is where translators must become educators to generate comprehensive understanding.

Professional academic translation is also a service and translators are bound by the conditions of each project. These conditions will affect the approach they take in their effort to generate comprehensive understanding.

This article offers specific tools, examples, and ideas to help translators maneuver in this area and become proficient ‘translucators.’

Parentheses interrupt the flow of reading. While their content may aid understanding, their form and position may hamper it. They should not be used lightly but can occasionally be appropriate.

Recently, a broadcasting station in my hometown invited high school students to attend a performance of Benjamin Britten’s War Requiem. Before viewing the performance, the students were to be educated about the war. The following is an example of using parentheses for the sake of education:

On Armistice Memorial Day Roy went with his mother to the cinema. →

In this case, it seemed justified to add information about Armistice Memorial Day in parentheses because it enabled me to introduce British war vocabulary to the German students. The content of the parentheses was short and did not seriously interrupt the flow of reading, the project was explicitly aimed at educating the students, and there was no fixed word count. I acted like a mother sneaking vegetables into home-made burgers.

Sometimes, brief explanations can be added as part of the target text. The following is another example from the project above.

This gravestone is listed by Historic England as a site of special interest. →

To explain what “Historic England”  was, I added: the British historic preservation authority in the German translation.

Like parentheses, footnotes interrupt the flow of reading. While readers are free to ignore them, footnotes may cause discomfort.

Overhearing a telephone conversation requires more effort than overhearing a conversation between two people next to us because our brain tries to fill in the gaps. The situation with footnotes is similar. Seeing the little number in the text makes readers think: “What am I missing?” To satisfy their curiosity, they are forced to chase down information somewhere else.

In conclusion, footnotes should not be used lightly.

However, like parentheses, footnotes have their place. Certified translations require the exact transfer of information, including elements like job descriptions of original job titles, source language characters, and the pronunciation of names and addresses.

In this case, I regularly opt for footnotes. Adding information in the main text like entire addresses in Japanese characters, followed by their phonetic alphabet renderings, would make it very hard for readers to get a coherent grasp of the content. However, the information may still be required. In this case, footnotes may serve as a reference for officials.

I also occasionally opt for footnotes in academic writing. For example, while some people reading a text that involves unfamiliar components of Japanese culture may only be interested in the content itself, others may also be interested in linguistic aspects. With a corresponding introductory note, it can be communicated that additional information regarding Japanese language aspects is available in the footnotes, giving readers the freedom to ignore or use this option.

While she had been eating onigiri (1) for lunch before, she was now eating sandwiches or pasta.

(1) Japanese: おにぎり - “nigiri” comes from the verb “nigiru” and refers to the action of grabbing or hand-shaping the rice. The “o” is an honorary prefix elevating this particular snack in status.

Translation requests often come with word or character limits, leaving no space for explanations, parentheses, or footnotes. In this situation, translators are sometimes torn between offering an incomplete translation and introducing a new loanword – a word adopted into another language in its original form.

For example, under such restrictions, I might wonder: Should I translate the Japanese word “onigiri” as “rice ball” or leave it as “onigiri”?

By translating the word, I can communicate the rough concept. By not translating it, I can draw attention to the fact that I am referring to a specifically Japanese item. Depending on context and objective, giving readers this information may be more important than giving them the crude term, “rice ball.” After all, in the era of Google, they are free to look up whatever information they are missing.

This is how each of the two options would appear:

Noriko suspected that her daughter’s stomach problems were due to the sudden change toward a wheat-based diet in Australia. While she had been eating rice balls for lunch before, she was now eating sandwiches or pasta.

Noriko suspected that her daughter’s stomach problems were due to eating mainly wheat instead of rice since moving to Australia. While she had been eating onigiri for lunch before, she was now eating sandwiches or pasta.

Option 1 begins with a hint that there was a change toward wheat; that the previous situation involved eating rice could perhaps be deduced from general knowledge (Noriko is a Japanese name, and in Japan, people mostly eat rice), but this is not explicitly stated. Therefore, “rice ball” was chosen to make sure this vital information was communicated to readers. “Rice ball” might also be the best option if the focus of the text is on the daughter’s dietary change.

Option 2 changed the original structure of the text by introducing “rice” in the first sentence to show that “onigiri” is a Japanese food containing rice. It might also be a better option if the focus of the text is on the daughter’s cultural alienation in her new surroundings to express her longing for Japan. Both options are of equal length. Both are possible.

Maya, Noriko, and Kento had all brought onigiri, but Maya’s mother had used whole grain rice mixed with sesame to make a triangle shape, Noriko’s mother had filled white rice with tuna and wrapped it with a sheet of dried seaweed, and Kento had brought a ready-made bacon onigiri.

This sentence offers a lot of context, giving readers a good idea of what “onigiri” means. It also includes triangle-shaped and round versions, which would make the translation “rice ball” inappropriate. This is a perfect example of when to effectively introduce a new loanword. Context can educate readers without additional explanations.

The decision of whether to use a translation or a loanword should be made by asking yourself:

·         Can the context help readers understand the word if left in the source language?

·         What is more important - giving readers a basic idea of what “onigiri” is (a kind of rice ball) or letting them know that this is a phenomenon from another language and culture?

·         Which option is more conducive to expressing the overall theme and focus of the text?

Elucidating concepts based on linguistic elements

The attack has three parts:

1        The attacker’s intention to strike occurs

To practice aikido, the person being attacked must catch the attack at stage 1. Intention involves the movement of ki.  Ai means “come together.” When we “come together” – when we communicate and interact - on the level of ki we achieve aiki.

In this case, context is used, and explanations are brief because there was a word limit. The explanations were necessary, however, in order to offer insight into the logic being used to explain the concept of aiki.

Translators are also educators. Sometimes secretly, like mothers adding healthy elements into dinner unbeknownst to their children, sometimes openly, as in footnotes or comments marked “translator’s note,” and sometimes by introducing new words to their readers in their original foreign splendor.

It can be helpful to acknowledge education as part of a translator’s work. This way, it becomes easier to identify where it is needed, and what tools to employ depending on the requirements of each job.

If translators become experts at ‘translucation’ - the product of education and translation - they can illuminate their readers’ minds and add a new light to the world.