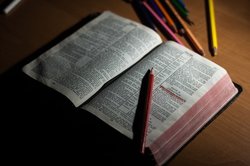 Like it or not, ambiguity is a part of how humans communicate. And even when unintended, it becomes an integral part of a written text, or – at the very least – a variable in its interpretation. As such, it is something that a translator must systematically confront.

When faced with an ambiguous word or phrase, an academic translator has essentially two avenues: to choose the most likely single meaning; or to maintain the openness to more than one meaning, as it is found in the original. To give an example, the Hebrew word, shema, has at least two different connotations in the Bible –  to audit words or even sounds; and to obey. While the context sometimes makes the connotation clear, there are instances when the meaning remains ambiguous and can be understood as either one of the two possibilities, or even as both.

One such instance is found in Deuteronomy 6:4, one of the most famous verses in the Bible. Familiar to most is the KJV translation, “Hear O Israel.” That translation here, however, almost eliminates the possibility of understanding, “shema,” as obey. In the opposite direction, Everett Fox, translates the word as “hearken.”  A third translation which perhaps maintains the most ambiguity is that of Aryeh Kaplan, who translates it as “listen.”

It is ironic then, that Kaplan, makes the following assertion more generally when warning against overly literal translation:

When one translates literally... ambiguities in the text may be preserved, if not aggravated. [Rather] the translator... has a responsibility to interpret [that which he is translating]

Kaplan seems to assume that an ambiguous word or phrase really has one truest meaning. But since it is not completely clear just by reading it, the translator needs to actively decide which possible meaning is the most likely. As Kaplan himself understands, this is an act of interpretation. But better to take that “responsibility” and give the reader the most correct reading of the text, than to translate a word literally and allow it to retain its ambiguity. To be fair, Kaplan may primarily be referring to words the ambiguity of which comes from insufficient knowledge on the part of the reader. And yet if we assume – as many do – that a text’s meaning is at least partly determined by its readers, even this claim is not a foregone conclusion.

As it would happen, the rabbinic tradition actually assumes a multiplicity of valid understandings. Indeed, much of the Talmud is made up of competing interpretations of Biblical material. And in one of the Talmud’s most daring statements, it proclaims that two given readings may both be the “words of God” (Eruvin 13b). Yet, this theoretical observation notwithstanding, Kaplan could respond that the whole point of Talmudic debate is to establish best readings. And so just as the Talmud tries to reach a conclusion and choose such a reading for any specific text, so should a translator.

Following the latter approach, however, would shut the foreign language reader off from access to the other possible readings conveyed in the original. From my perspective, it is a taking the living word and petrifying it. That is to say that unless a definitive reading has been agreed upon and all other readings completely discredited or otherwise made obsolete, a translator must allow the foreign language reader to see the basis for the various understandings that exist in the original. Hence a good translator working on a literature translation, or a legal translation – to mention the most obvious applications – must be aware of its major contemporary interpretations.

What a Translator Needs to Keep in Mind

My position here obviously reflects a certain approach to literary theory. But whether consciously or not, this is really true of all translators. And so the more one knows where one stands, the more consistent a translator one will be.